Don't miss the chance to get your orders in before our annual stock take from January 16-29! All orders resume January 30th. MY ACCOUNT
Skip to content

What’s really on display during a skydive demo 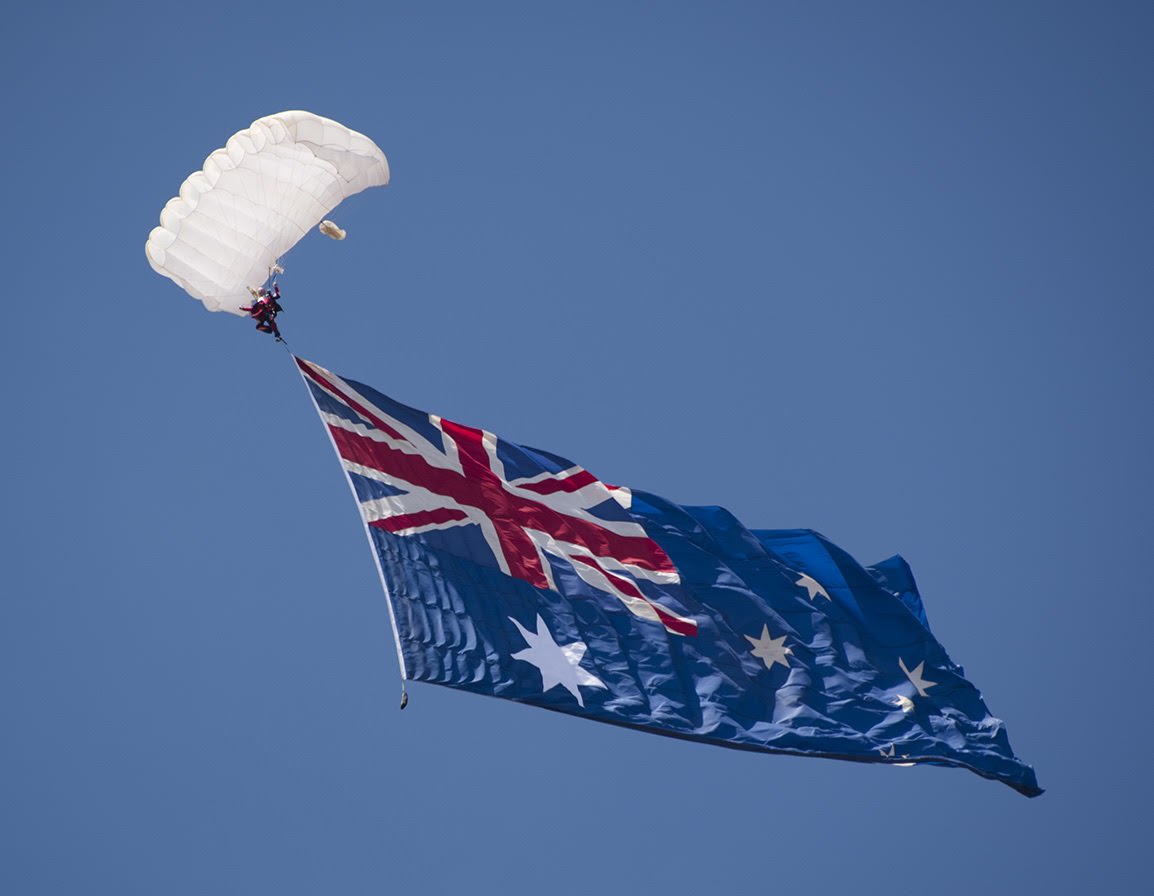 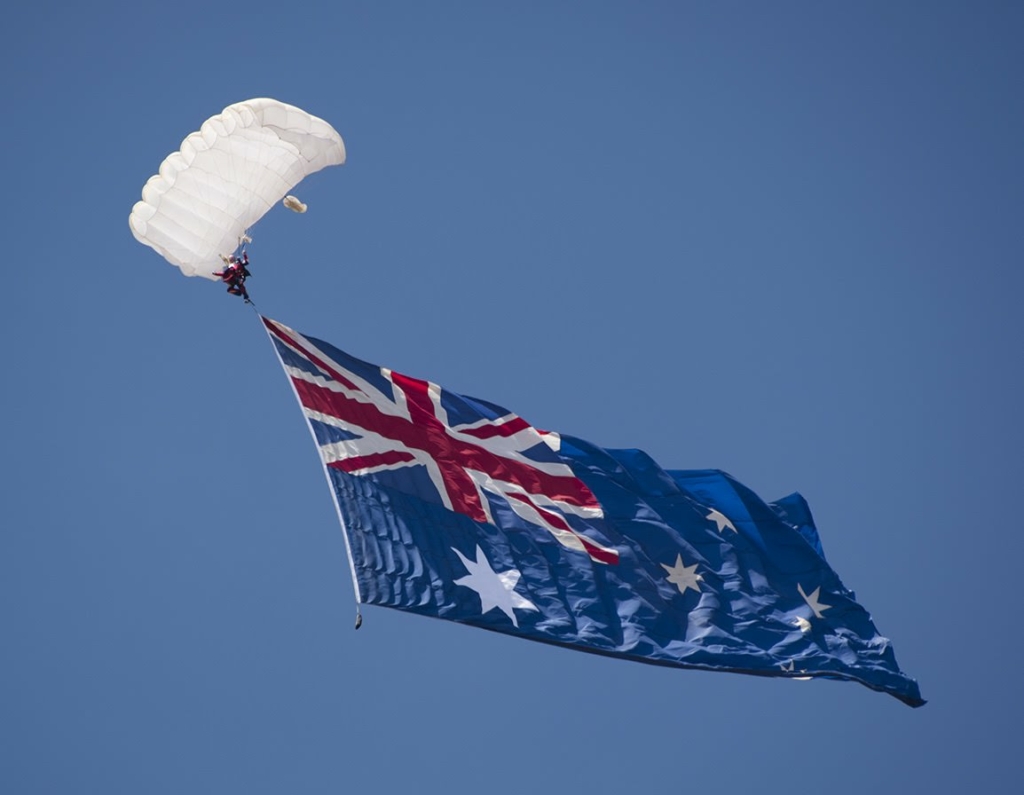 Rodney Benson has been wowing crowds at airshows around the world for longer than I have been skydiving. Rod’s responsibility as business owner for his customers, as a leader for the safety of his team, and as a performer, represents all of us in the skydiving community.

Rod first approached Manufactory Apparel, to ‘design a custom jersey and uniform that would continue to wow spectators on the ground’ after performing a display skydive, my reaction was instant “…of course” I blurted out. This collaboration would reflect on the sport of parachuting at the ground level (no pun intended), where support for skydiving is needed most.

Manufactory Apparel, was asked to join forces with Rodney Benson and his team, to open the show at Avalon Airshow 2017 flying the National & State Flags; 1 team of 6 skydivers consisting of 3 flag-display skydivers from Rodney’s team, sporting flags over 3000sqf, and 3 sport skydivers from the MX sky-series team wearing ankle brackets with coloured smoke, deploying at 5000 feet, for a hop ‘n’ pop skydive, landing along the grandstand for all the spectators to cheer at the opening of each days flying.

Upon landing, the RAAF F-18F Super Hornet would take the show back up to skies.

Rodney, and his team of veteran skydivers have been involved in the sport for over 25 years, with knowledge spanning two generations in display jumping. Landing in football ovals, inner-city parks, cruise ships and airshows are the office job we as skydivers all dream of – and to be flying overhead a crowd, buzzing in an Airvan GA-8, above locations you can only dream of jumping into, sounds amazing to any skydiver, but the reality of it needs to be taken much more seriously than the idea of ‘hucking’ a 270 over the crowd and  ‘draggin’ your feet through the gravel along the boundary lines.

The most commonly asked questions by non-skydivers, are in regards to safety and the fear or excitement levels, “do you still enjoy it?”, “isn’t it the same every time?”, “what if your parachute doesn’t open?”. The answers to these questions may seem simple to seasoned skydivers, but what needs to be considered is the delivery of the answer. For an extreme sport to involve the general public, fear needs to be replaced with excitement to encourage growth – making any display skydive, a display of who and what skydivers really are. A responsibility for the crowd’s safety, the team’s safety and the safety of the sport lies with each display jumper, and therefore choosing the right team is paramount.

At such a large scale event, planning is the key to success… or should I say multiple plans, and back up plans make up a set of keys!

With the runway facing North-South, on the ground we planned to exit at an altitude of 5000 feet, the 3 smoke jumpers exiting first, followed by the 3 flag displays. We would hold under our canopies to the South of the runway or South-South-East, and make our patterns down the 3048m runway on the West side in full sight of the grand stands and public – cross the 45m width as our base leg and land parallel to, if not slightly cross wind in view of the attendees. Flying above any spectators is strictly forbidden for any aircraft therefore ruling out a left-hand circuit which was commonly used at our local DZ, but it was also important to understand that the landing area came with restrictions, all which ended to be noted should our plans need to change.

The number 1 rule in display jumping, as Rod made very clear on the ground was “be prepared for anything”. We piled into the plane a full hour prior to the scheduled jump time, and flew the skies above for over 30min holding at 2000 feet, for the exact time that all other aircraft will have landed and turned off props, to ensure our safe arrival from the skies. With the discovery of howling easterly winds above 1000 feet at 30 knots within seconds of our take off, our game plan made it’s first change, as we couldn’t risk the easterly winds blowing any of us over the runway to the west side and into ‘tiger country’, completely full of pyrotechnics and explosives for the night time displays.

With this wind reading, the height was bought down to ‘no more than 3000 feet’, giving me the first jolt of reality that i had very little time to react if my JVX88 didn’t want to play ball (so to speak), my team mates didn’t hold back in making it clear that I was peaking at this stage… but I don’t think they could see the C-130 Hercules below us in the landing area either… Still there was no time for self doubt, just remember the planning. 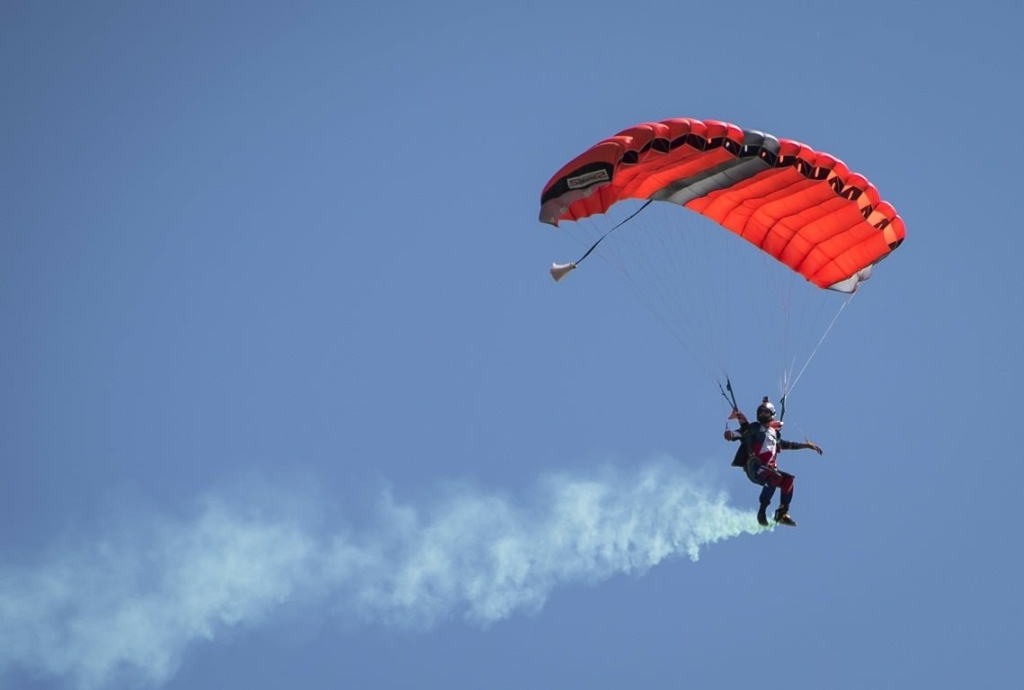 When the 2 minute call was made, as any other skydive, the door swiftly opened, and spot was cleared for exit. I pulled the ring pull on smoke canister #1 and nothing. My heart rate jumped up again with another change to accept, and we immediately go for smoke canister #2, a light orange haze slowly spoils from my ankle – I looked to Rod for the final nod, and game on! Leaping from the plane, the natural fear escaped me and I was left with the serenity of Freefall, and as I reached for my pud to deploy into the sub-terminal airflow my container opened slowly, (which i expected given that I was double stowed hoping for 5000 feet with a 10second delay) and on heading into a stream of orange smoke, I was free to make my way down the runway.

I collapsed my slider so fast it would look like I sped it up in iMovie! – but this is not the case at all, and because my ego was still firing in my head telling me ‘I have time to huck a 270 in front of the crowd’ I reached down to loosen my chest strap and panic set in as it jammed in the buckle! This had never happened to me before, and after a short struggle it jammed tighter again. “Typical” I thought to myself, of all the times to happen, now is the time. 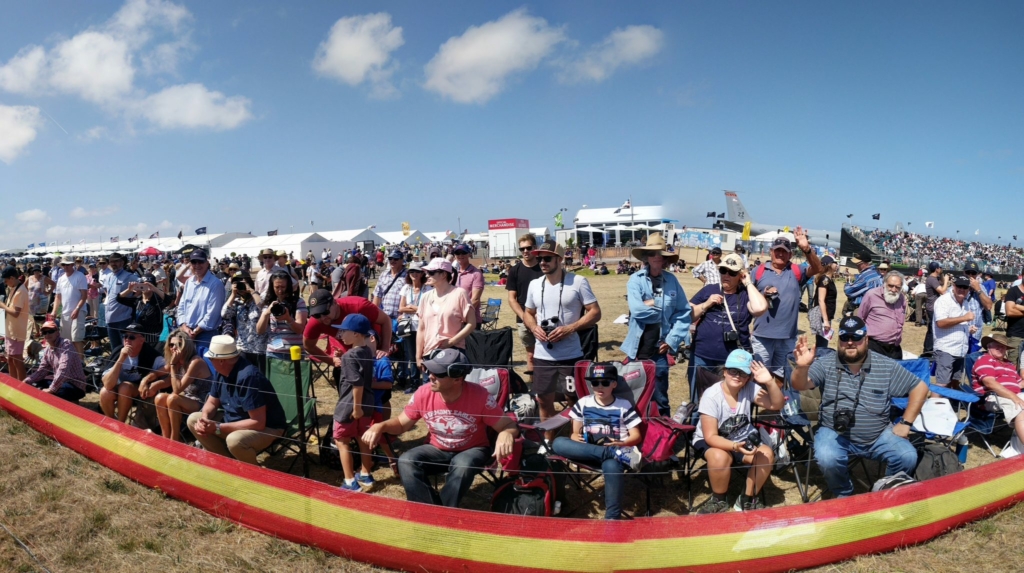 No time to be selfish I think, the next decision I make will reflect on the entire team, and I have the responsibility of upholding Rod’s business reputation in my hands, landing safely was the priority of my plan. A simple turn in front of the crowd with a really pleasant landing show casing to the public the grace and safe approach of a parachute. Safety is key, after all it’s not my ego that should be on display.

I landed safely in front of over a thousand people, and it was just as rewarding as any landing you can walk away from could be. Was my ego satisfied? Not entirely, but those feelings were soon left behind, after the crowd wooed me over for photos and and more explanation about the jump itself. The jump was just the vehicle of delivery to get who I was standing in front of right now, this was the real purpose – showcasing how exciting and professional skydiving can be. The custom skydiving gear that I had personally designed, and was now wearing with pride for Rodney, was the collaboration I had in mind during our first discussion, and Manufactory Apparel was sharing the responsibility with Rodney’s display team in real time. 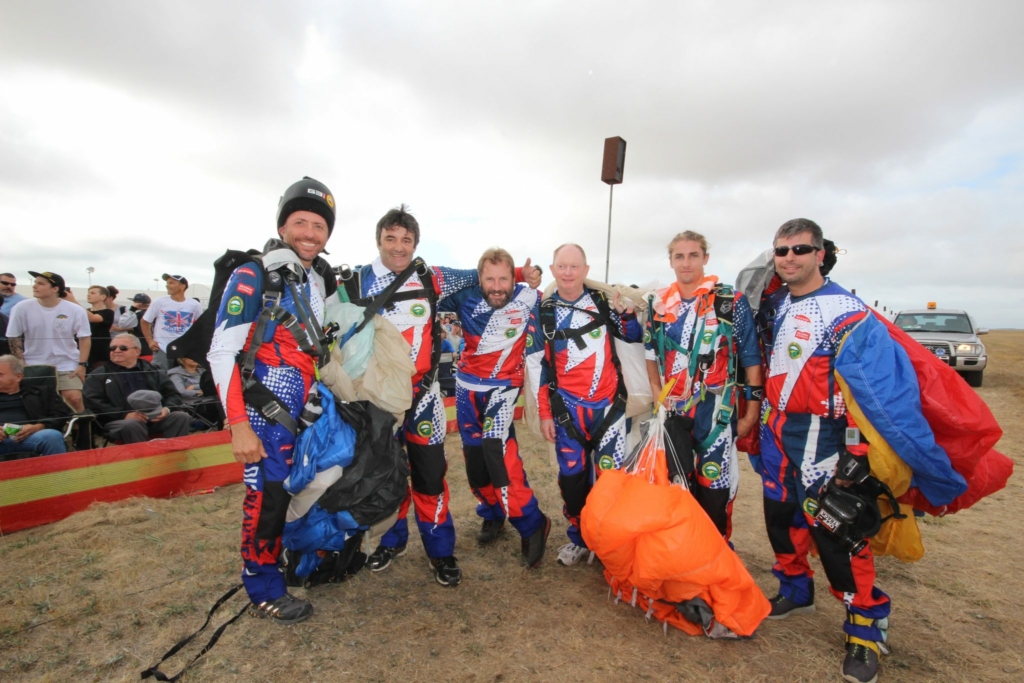 The entire jump was less than 1 minute 50 seconds, and was it the same as every other skydive? Definitely not.

Would I like to do it again? Absolutely, and more importantly what would I change? Personally I would ditch my high performance canopy, I would like to interact with the crowd more, on a larger canopy that gives me more air time, and certainly more time in general. As Rod mentioned, and we surely all know already – the general public doesn’t care if you land at 50 miles per hour or 10 miles per hour, the jump is spectacular enough and the icing on the cake so to speak, is that everyone lands safely – to ensure that when just 1 of those public spectators decided to take their first jump, they feel confident in our abilities as skydivers to welcome them to our community.

For more info on our styles CHECK OUT our new website: www.manufactoryapparel.com and for your event and boogie promotions CHECK OUT www.custompullupcords.com