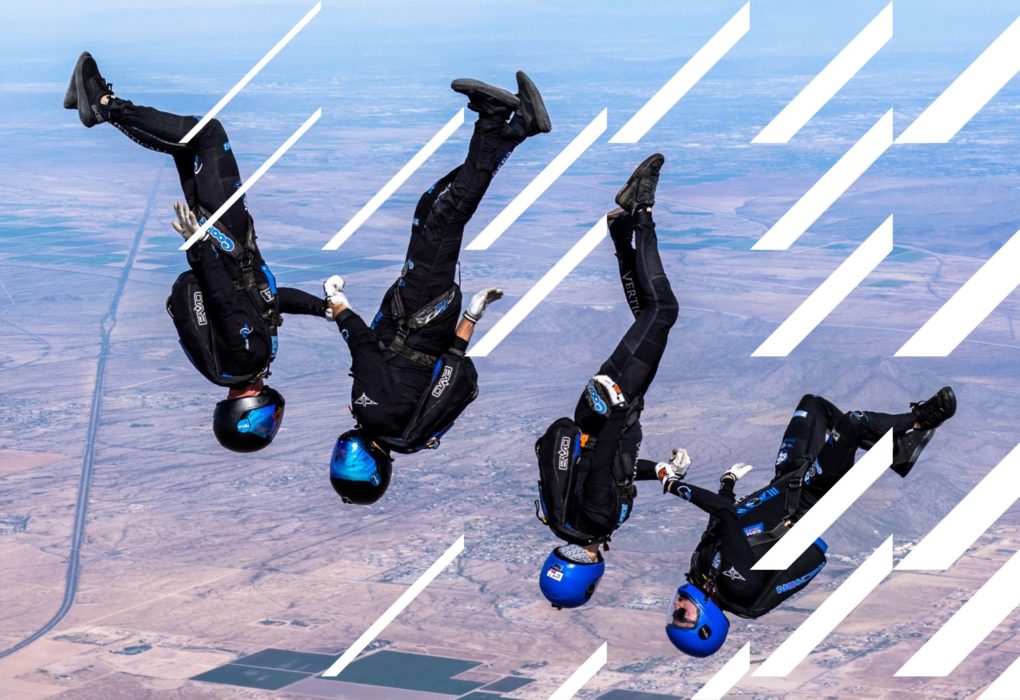 Competing against others can feel daunting, especially if you’re just starting out in your new sport or discipline.

But is competition still relevant? We asked SDC Core – the 3x World Championship team home to Skydive Chicago and powerhouse competitors of Vertical Formation Skydiving: what they had to say about how healthy competing makes them feel!

What keeps you motivated to jump the same set of points over and over?

Well, VFS as a discipline is incredibly challenging, and so that continues to motivate me, as I strive to be a better flyer. The number of possible combinations for the randoms and blocks is more than the number of stars in the universe, so the challenge will always be to figure out this specific sequence and try to get it right. Each training day is another opportunity to learn something new about this amazing discipline and improve my flying skills.

From when you first started competing to where you are now, has the sport of skydiving evolved the way you thought it would?

I’m not sure if I thought about how it would evolve, but looking back, I’d say it’s done very well. We constantly strive to make the skydiving world safer, and I think on most metrics, we’ve done a great job. Competitions continue to grow, even an incredibly difficult discipline like VFS has seen growth over the years, as well as some other smaller disciplines that have gained a foothold and then continued to grow.  Of course, formation skydiving continues to be a huge discipline, drawing typically more than 75 teams at the US nationals, and 30-40 countries represented at World Meets, with more participating all the time.  Since I also believe that sport can bring people together, I want to mention that I watched athletes from Dubai shake hands with athletes from Isreal, at a time when their countries were not being very friendly to each other.  It’s not been perfect, but it has been steady improvement on many fronts.

The indoor and outdoor divisions of skydiving have always been separate, but with the growth in popularity of this new form, some think it should be under one governing body.

Wind tunnels have had a tremendously positive effect on the world of skydiving, allowing people to grow their skills in a cheaper and potentially safer environment, which translates into more skill for every skydive, and less potential for dangerous situations.  It has also brought some aspects of skydiving closer to the general public.  If any division exists, it might be that there are children who are incredibly talented in the wind tunnel, but are not yet able to skydive.  There are also teams that train only in the wind tunnel, because of the relatively low cost and ease of scheduling.  I think for the governing bodies of skydiving, that’s sort of an existential question about what to do with indoor flying, since they were established to regulate skydiving, and clearly the tunnel is not skydiving.  With the tremendous growth we’ve seen in the world of wind tunnels, I think there’s enough interest to justify a governing body on its own.  For sure it’s a learning phase right now for tunnels, but they’re getting pretty good at it, and the lessons learned from the skydiving world offer some good templates for them.

With the withdrawal of military and federation-funded teams in recent years, has this made it easier for competitors to enter skydiving as a competitive sport?

Some of those teams were the very best in the world, and so a gap was left when they stopped competing, which may have left the other teams feeling like it was a greater possibility to win the gold.  I doubt that most of those remaining teams would want to celebrate the loss of those incredible competitors, no matter what the reason.  Personally, I want to win because we’re the best team, not because the best team wasn’t able to attend the meet.  But I don’t think it’s easier or more difficult to get into competitions now.  I think anyone can get started in competition at any time.  The withdrawal of those teams affected the very top teams in the sport, but had very little effect on the new competitor.

Extreme sports like skateboarding and surfing are now featured in the Olympics. Do you think any skydiving disciplines will ever make it as a sport? Would that be a good thing?

Since I believe skydiving to be a very challenging sport, I would love to see it be something featured in the Olympics.  I question whether the Olympic committee will ever feel that there’s enough interest from the general public in skydiving, but I think if we did make it to the Olympics, people might be very interested in it. I think there would need to be an incredible team of commentators because, at the highest level, formation teams move so quickly that people unfamiliar with the discipline would be lost.  Good casters would need to be explained all the way.  If skydiving is elevated to an Olympic sport, I think it would be great for the sport generally.

Do you think the way we judge disciplines in competition could be improved and for what benefit?

Similar to the overall picture of skydiving, judging has improved tremendously over the 19 years I’ve been competing.  To their credit, the judging community requests feedback after every competition and allows competitors to voice their concerns directly to the chief judge, event host, and competitor representative.  They take that feedback and try to do better to benefit the competitors themselves, who deserve to win or lose on their merits. Better, more accurate, more consistent judging will allow more competitors to feel that they met their opponents on a fair and level playing field.

Finally, why should people get into competing in skydiving and what would be your top tips for them?

I think competition is the best way to improve your skills. The dive flow doesn’t care if you can’t transition over your left shoulder, but when that is required, it does expose the weaknesses in your flying. Once those are exposed, you can better understand where to put your time and energy, because those are the places you need to improve.

Competing in skydiving also means you’re going to get out of your little world and step into the bigger community that exists. You’ll start by meeting people from around your state or the local area, probably next to people from around your country, and finally, you’ll start to make friends from around the world. Your dedication and sacrifice will be justified by the equal dedication and sacrifice of those fellow competitors, who share your passion for this amazing sport. You’ll see incredible drop zones around the world, as well as visit those countries while you’re there to compete. If your wildest dreams come true and you stand on the podium on the world stage, you’ll probably see that it’s a pretty fleeting moment, and only one of the incredible number of amazing moments in the years it took you to get there. You’ll see personal growth, as you realize the challenges and rewards of spending so much time with your teammates.

Start by picking a team based on personalities you can get along with, and not based on flying skill. Second, be ready for criticism of your flying, which is an absolutely essential part of getting better. Third, well, it’s a little self-serving, but you need to get professional coaching. Although it seems like a big expense, it’s a lot more expensive to go through all those mistakes that a coach will help you avoid. Coaches can also help you through some of the most difficult personality conflicts that may arise, which can save you from your team giving up when it gets tough. Finally, embrace the journey. I know that’s a little cliche, but it’s totally true. You spend years getting to those goals. If you’re on the podium, it’s gonna be about 2 minutes. You really need to enjoy the journey getting there since it’s 99.9% of the time you’re going to spend on this team. 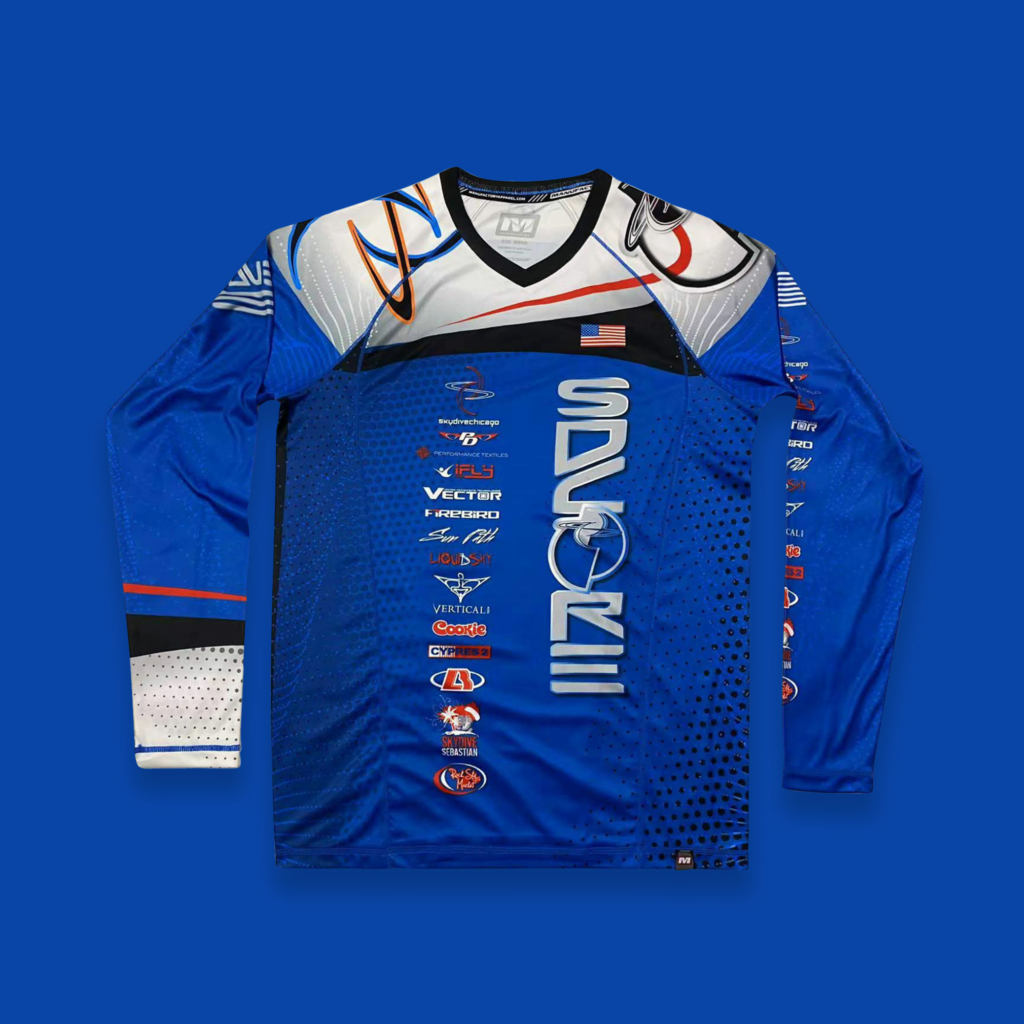 Show up on the packing matt with the Official SDC Core Team jersey.

What do you think? Let us know in the comments!

It seems that competition is still VERY relevant. According to SDC Core, it’s the best way to learn and grow as a skydiver in any discipline. 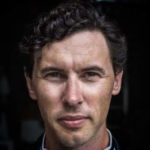 Rob Delaneys’ career in design has spanned nearly 20 years working for industry-leading apparel companies. He is best known as the creative director and co-owner of Manufactory Apparel, whose energetic style has become iconic within extreme sports communities across all disciplines.